"It's not harder, but it is more complicated" — IGLing from CS to Valorant

Sure, he was entering a new game where he would have to call the shots and strategies for a team of players who had been playing Valorant professionally for several months already. But for him, it was a natural role.

Many of the IGLs on North America's top Valorant teams share similar perspectives: they made their names as IGLs for their Counter-Strike teams and are using that experience to direct their teams in Valorant.

And, at least so far, that past experience matters. 100 Thieves won the North American bracket of the largest Valorant tournament to date thanks to veteran clutches and fantastic leadership from longtime IGL Joshua “ steel ” Nissan.

It was the first professional Valorant tournament he had competed in yet his team appeared to be the most well-oiled of the whole competition. “I don't think it was too difficult for me,” steel said of adapting from one game to another. “I think there is a lot of CS overlap. I've been saying since I started playing this game that it's like 80% CS and then 20% other.” 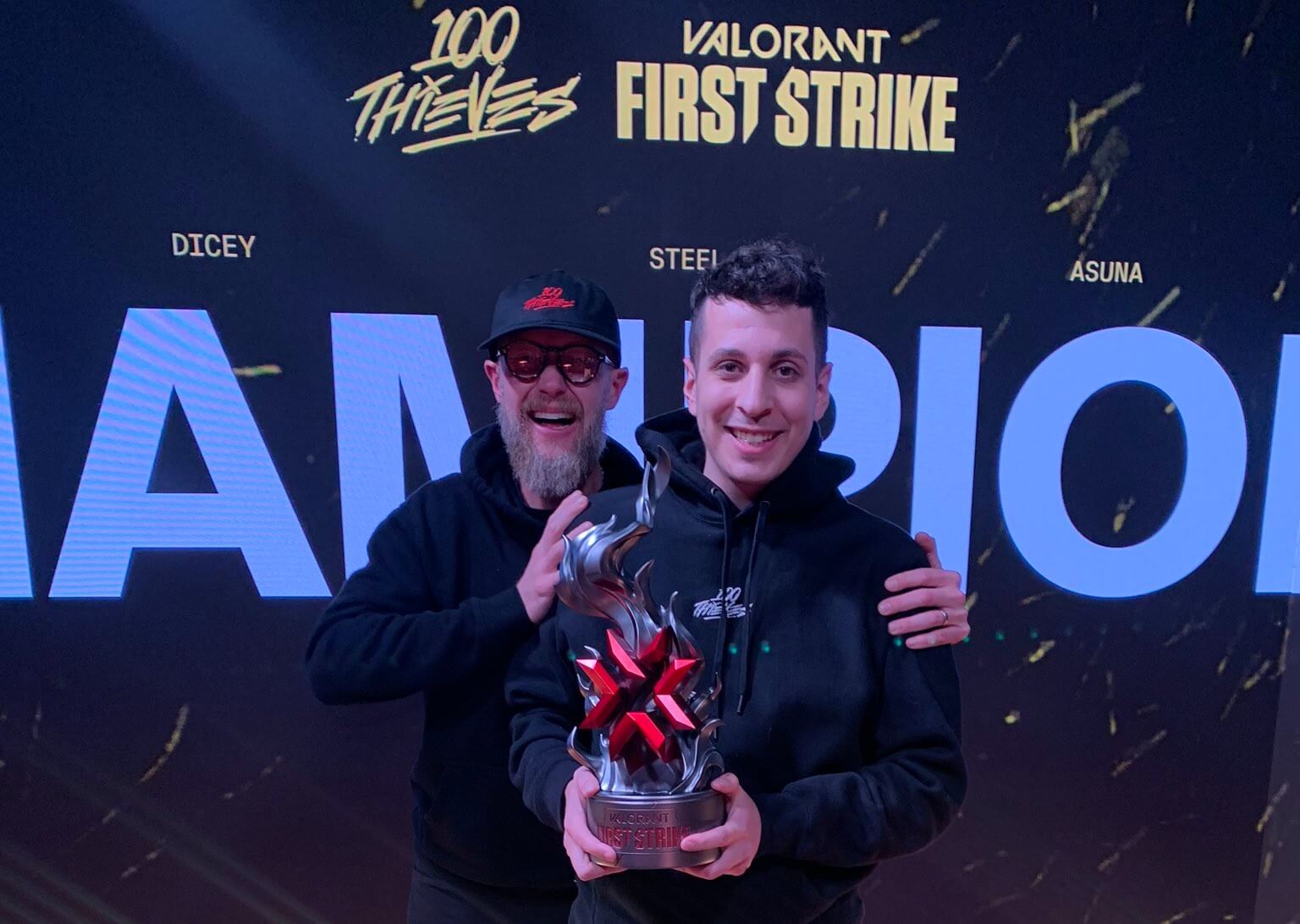 That view he had of his transition from one game to the other mirrors his view on the difference in IGLing between the two games. He pointed to things like ultimate economy and control of ultimate orbs, pacing in relation to verticality from ability usage, and a wider variety of utility from abilities as factors an IGL has to consider in Valorant that they wouldn't typically consider in Counter-Strike.

“There's so many things to consider there that you kinda have to figure out how you want to take the pace of the round: do you want to go fast? Do you want to go slow? Do you want to take map control?” he said. “And I feel like in CS, it's a lot clearer to know these things. But it's just a different sort of thing. So once you learn it, you kind of just know it. And it's not something that you sit there consciously thinking about. So I don't sit there thinking if it's harder or not, it's just different. There's a lot of overlap, but there's a lot of different things that you just have to pick on.”

In fact, steel wasn't the only North American IGL to discuss the complexities involved in leading a Valorant team while stressing that these complicating factors don't make the role any more challenging in this game.

DaZeD, on the other hand, left out any remark about Valorant being no more difficult to IGL in than in CS while coming to the same basic conclusion as FNS.

He elaborated with a comparison of the games' utilities: he noted that Counter-Strike has had a static type of utility usage for over a decade because they haven't changed anything except for adding the Molotov since 1.6, while in Valorant an IGL has to keep track of five ultimates and three to four abilities for each character. “So it seems like it's gonna be a lot more chaotic, but as I play more and more I feel like I can keep track of everything. It just takes more time to do it,” he said.

DaZeD spoke more about his IGLing in a video for T1

If FNS is any evidence, DaZeD's experience isn't unique.

DaZeD expanded on these differences to also point out there are only 12 rounds in a half compared to CS's 15, half-buy rounds can be dangerous when ultimates come into play, and different teams like to use team team compositions which in turn create different play styles. In all, he says things happen fast in Valorant for an IGL. How to best capitalize on all of these differences will take time to master.

“The current state of the game is kind of like an iceberg,” DaZeD said. “You know how you only see 10% of an iceberg, like the top of it? I think that's the depth that we're going through right now. And then the other 90% is going to be discovered in the years to come.”

In fact, DaZeD isn't the only IGL thinking ahead to how to maximize the minutiae of Valorant. steel zeroed in on one thing in particular when talking about taking lessons from his brief stint competing in Overwatch and applying them to Valorant.

“If there's anything that I would say I took from Overwatch, it's more of the agent synergies and I don't think we do a whole lot of it right now,” steel said. “And it's something that long-term I do want to change. But I think that's like one of the things from playing MOBAs and playing Overwatch in the past that I will be looking at.”

While it's evident steel was talking about synergy between agents and other agents, IGLs have also had to think about the synergy agents have with the role they're playing. But so far, the consensus appears to be that you can IGL while playing any character as long as the character fits your style.

“I think it depends on the type of IGL you want,” DaZeD said. “You can do it on any hero.”

While steel plays sentinels like Cypher and Killjoy, he immediately pointed to Sova as another good IGL pick. He even said someone could play IGL from a duelist role and set themselves up for big plays. The one character he specifically mentioned he wouldn't want to play as an IGL was a popular pick: Omen.

However, FNS honed in on Omen as his top pick for the role. “I think the ideal agent for an IGL is an Omen because you're going to be part of the pack,” he said. “So you'll have the most information, and you'll be able to make a good call and coordinate all the smokes and stuff like that. So ideally the Omen, maybe a Brimstone, just a smoke character would be ideal for an IGL.”

But despite that, FNS doesn't play Omen or any smoke character. He plays Cypher. “I think I didn't believe this at the start, but I think Cypher is a decent agent for an IGL,” he said. “So long as you have a team that communicates and is able to give you the information and feed you the information as you're lurking around the map. And my team does a pretty good job of that. So I'm able to call on Cypher pretty comfortably.”

He wasn't the only one to gravitate to Cypher. “I definitely like being a sentinel,” steel said. “I think sentinel is definitely my best role, but it's probably not everyone's best role.”

Noah “ jcStani ” Smith used to play Cypher while serving as IGL for Immortals. But he has since switched to Omen. “We kind of realized I wasn't able to lurk and call. The style of calling I like to do is a lot of mid-rounding. I want to have control over the game,” he said. “And when you're playing Cypher, you don't have much control, you have to lurk, you're not really in the group. So we kind of realized we needed to move me to a more centralized role in the team, like, obviously playing with teammates, supporting them, understanding what's going on — not just looking at my mini map the whole time. So that was a kind of obvious change that we had to make.”

DaZeD has settled on a slightly different pick than the default sentinel or Omen: Sova. He said he adopted the role because he wanted to play slightly differently than he did in CS, where he often took map control and his teammates would play off his pace. “And in this game, I can kind of do that with Sova on some maps but I wanted a different role in this game where I can kind of like micromanage a little bit if I need to, but from a position where I've stepped back, and I think Sova allows me to do that really well.”

The ultimate outlier in North American IGLs, however, is Shahzeeb “ ShahZaM ” Khan, the IGL of Sentinels. While he plays a variety of agents, his most notable pick is Jett. And, like most Jett players, he uses the Operator. “It's a little different because, obviously, people will compare me to other Jetts and stuff,” he said. “But my responsibilities are more than just staring at my crosshair and getting kills. I do enjoy playing other characters and I feel like I'm very comfortable with them. But it's how we fall into our roles. My main goal is to set up the round and figure out what we're doing and make sure we're on the same page more so than going in and trying to make space and get kills. So sometimes I'm not crazy aggressive as you see some other ones. It's difficult because you stare at the radar more so than your own crosshair. So I won't get as many kills as when someone else is telling me what to do. But then again, I feel like it's a system that works for our team, for the most part.”

Regardless of what character they play, FNS feels like an IGL needs to be good at mid-round calling to be successful.

“I think IGLs who call consistent B or A hits without having set defaults in place are going to fall behind, whereas IGLs who are able to mid-round correctly, and call good defaults, and be able to coordinate strats that aren't already set up that you've already not gone into server and gone over — those IGLs will succeed in this game,” he said. “So I would say those IGLs that have a good mid-rounding style will succeed a lot more in this game than IGLs who kind of just call at the start of the round and then just call whatever set execute they have from whatever they went over in a server.”

But perhaps he'll think differently down the line. After all, the top IGLs of North America have already shown their thoughts on the game have evolved quickly since they first entered it.

No matter what changes, though, these players will likely be the catalysts — at least in North America. They are the brightest minds in the region, after all.

It was a good read. Great work!

My bad! Don't know how I messed that up, I guess my brain defaulted to the win score and I didn't catch it when I read through it again.

It has been fixed now, thanks for pointing it out!