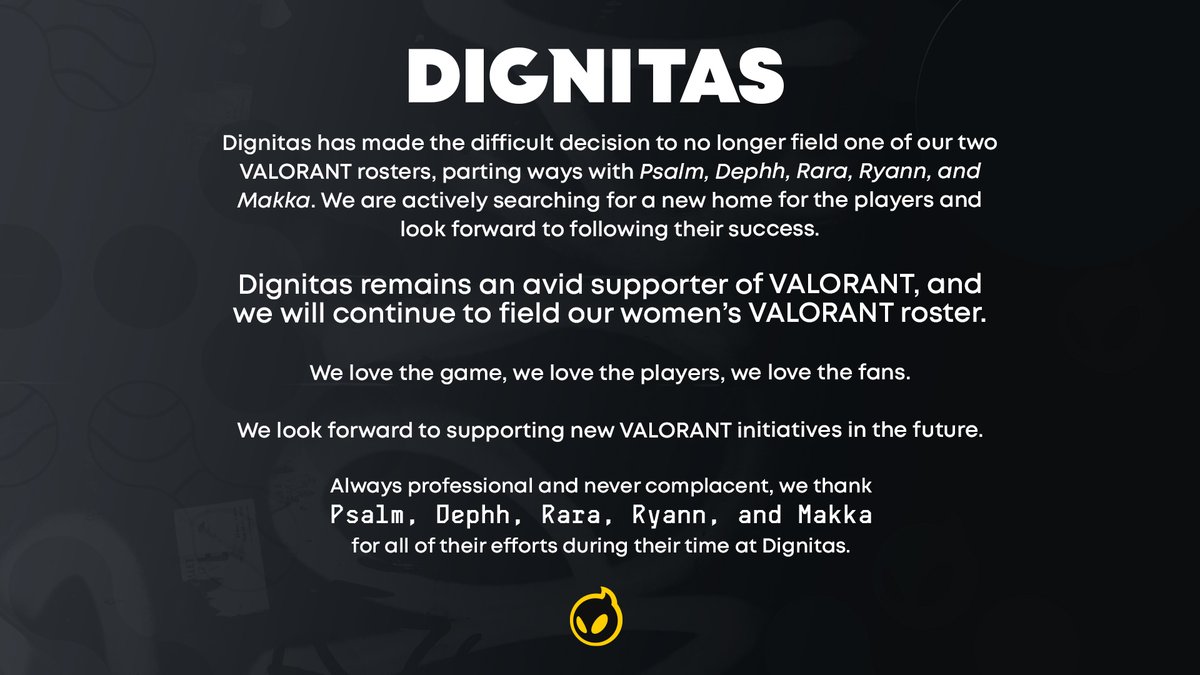 Homeless Inactive supamen Phat Le psalm Harrison Chang POISED Kevin Ngo dephh Rory Jackson in August of 2020, the roster peaked in its debut in the Pop Flash Invitational, placing fourth amidst North America's best. The team has since failed to find its footing, unable to qualify for both First Strike and Masters 1 of VCT.

The lack of success spurred a recent attempt to revitalize the roster by benching psalm and trialing koalanoob in the NSG March Monthly, but the effort proved futile as the team struggled in groups and fell to Ghost Gaming 2-0 in the playoffs.

The team had previously signed up Stage 2: Challengers 1 qualifiers under Dignitas, but will continue competing in the event sans sponsor.

Rara and makka deserve a good team, the others not so much

Especially rara hopefully he gets an actual good team because the kid is cracked, everyone in the scene is even getting his crosshair lmao

I think Dephh also deserves a chance I think he a good igl and a good sentinel player.

EZ5 really put the nail through the coffin eh?

I agree rara and MAKKA deserve a good home, other than them this team was made up of tier 2 players at best. I could see one of them going to Andbox if their trials don't work out and personally I would prefer rara over mada and probably MAKKA over Vice.

remember when Dig was anti-TSM and a tier 1 team?

yup, sucks to see this

i cant remember a single good match of Dignitas. This guys got paid so well i guess and all they did was wasting the big chance they got. Big sad emote for psalm! Hope he finds a new good Team!

rara and dephh deserve to be on new teams for sure. best of luck to all the players though!

i saw these guys ever since homeless was a thing

This team was so disappointing. After they beat TSM twice in 1 tournament to knock them out(when TSM was inarguably a top 2 team in NA) I had high hopes for Dig and thought they had so much potential, which they never really lived up to. Rara, Makka and Dephh all deserve to get signed to good teams and as for the other 2: Idk too much about ryann, other than he was a former tier 2 cs player but I didn't watch him play too much valorant and psalm is a good sova but didn't fit this roster as a duelist and should get a shot as well. Anyways, best of luck to the players

Yo just a thought. What if TSM picked up Makka and Rara, replacing Reltuc and Drone?

Team looks sick but idk how it would actually perform.

Looks good except for replacing Drone. He hasn't been great recently at all but if they move Drone back on sova, add rara to play duelists and then drop hazed and reltuC than the roster would have some of the most firepower in NA. However both would result in TSM lacking a IGL and we've all seen what having great firepower without a good IGL results in(G2). Also I don't think any of these guys would be a good IGL so TSM needs to keep 1 of hazed/reltuC or sign a new IGL. Honestly, even though Subroza has been incredible for TSM, he plays the same role as hazed so maybe dropping Roza and reltuC and keeping hazed as the IGL would be a better move. Or they can always just run with this 6 man roster as well.

dignitas "was"... sadge
I feel they kept oderus for too long and didn't know how to play Psalm. Questionable roster moves like dropping supamen for Ryan and subbing Psalm in for koalnoob wasn't the play. I think they could have made it farther if they dropped psalm and oderus early one and built around dephh on sentinel, supamen on smokes, and makka on sova. Getting rara and a good jett player earlier would have helped their placements significantly.

but maybe they can surprise us