"He's the epitome of [a professional]" — How Spyder fits into T1

It was a move that caught everyone by surprise.

The fifth and final player T1

Up until that point, T1 had exclusively signed North American Counter-Strike veterans to their Valorant roster. In fact, T1 had brought together four of the five players who played for the infamous iBUYPOWER in the early days of CS:GO.

Spyder, however, is a former Overwatch player with no professional experience in CS. He is South Korean — the first and only player from South Korea to play Valorant for an organization competing in North America or Europe.

On top of that, the move happened fast for outside observers. His Overwatch League team, the Florida Mayhem, announced he was leaving the team just a few hours before T1 announced he was joining their Valorant lineup.

But the move wasn't all that sudden. Spyder made no effort to hide his interest in Valorant, uploading several screenshots of his grind in Ranked to Twitter throughout August and September. And T1 apparently took notice.

“Spyder has always been a highly-skilled hitscan player in the Overwatch League and we figured that he would have an easier time transitioning that skill set over to Valorant,” said Won Joon Choi, who is lead North American game ops and talent scout for T1. “We approached Spyder to play for us when it seemed he had interest in the game.”

That description of Spyder was apt. He had distinguished himself as a formidable hitscan player who was one of the best in the world at the game's sniper character, Widowmaker, as far back as late 2016, nearly a year and a half before the first Overwatch League match was ever played. He joined the Florida Mayhem in the Overwatch League in February of 2018 and continued to show off his prowess on the stage of Blizzard Arena Los Angeles. His confidence led him to playing the sniper aggressively, thus endearing fans impressed by his flashy play. If he wasn't the best Widowmaker in the game, he was at least in the conversation. 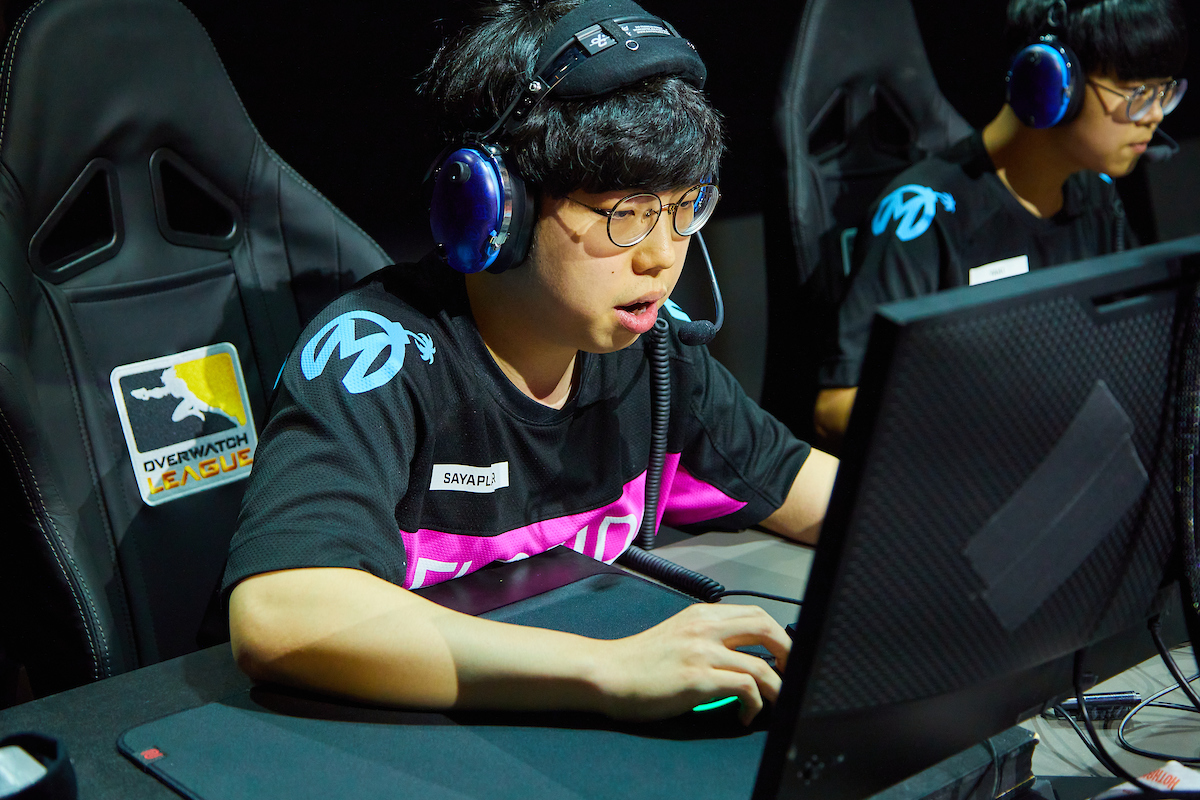 Spyder, then known as Sayaplayer, was on the Mayhem for longer than any other player in team history. Image credit: Stewart Volland for Blizzard Entertainment.

But he faded into the crowd in 2019 when a meta shift left snipers relatively useless — in fact, all DPS characters were pushed out for most of the 2019 season. His playing time nearly vanished in 2020 when the Mayhem opted for a player with a slightly wider hero pool to start as their hitscan and a health issue forced Spyder back to Korea. In retrospect, the time was right for the superstar hitscan's switch.

T1's IGL, Sam “ DaZeD ” Marine, said that the team's management came to the players and asked if they wanted to try out Spyder, who they described as one of the best Overwatch players in the world who was super good mechanically. “I was like, ‘sure,' and we tried him out.”

It didn't take long for DaZeD to be sold on Spyder after that.

“I would say pretty much immediately after playing with [Spyder] and seeing his dedication, his mechanical skill and just talking to him I really knew I wanted him to be a teammate, and hopefully a teammate for a long time,” he said. “Hopefully, he feels the same way.”

At the very least, he's happy with the team he has chosen. “I joined T1 because I wanted to be the best and T1 has a great reputation in esports,” he said. He then described how the team found him while he was playing ranked in Korea and scrimming a little bit.

While he may have been in Korea at the time he joined T1, he has spent the majority of his time since 2018 in the United States. The roster he played with in 2018 and for part of 2019 mixed western players with Korean players before shifting to an all-Korean roster later on. All of that added up to him being able to fit right in with his North American teammates.

“We initially scouted Spyder specifically from the Overwatch League because his English is a lot better than most people expect,” Choi said. “He is able to communicate properly during scrims and matches. He has no trouble understanding the English spoken to him but may struggle finding the right words at times to relay his thoughts.”

As a testament to his English ability, Spyder went through the interview without the help of a translator. While he said his English wasn't good at the start of the interview, he answered every question in English perfectly fine.

Still, all of that experience doesn't mean it came easy. “It's really, really hard for me especially because when I was on Florida, I spoke Korean only because my teammates — everyone's Korean,” Spyder said. “Now, I have to speak English and I have to understand different cultures. So really, it's tough.”

But it appears he has succeeded thus far despite the challenges. Which is good, because his language abilities are important beyond just being able to communicate in-game. As mentioned before, Spyder doesn't have much experience playing high-level CS or any other tactical FPS. So there's much that his veteran teammates need to teach him.

Fortunately, no one thinks there will be too many problems with teaching him.

“We initially thought there would be some complications [in him adapting from Overwatch to Valorant], but as I mentioned previously, we figured he would have the easiest time out of most Overwatch League pros to transition to Valorant,” Choi said. “It helps that we have veteran players that teach Spyder the tactical shooter aspects of the game and that he has played counter strike before Overwatch.”

In fact, DaZeD feels like they've already taught him plenty.

“I would say that we definitely had to teach him a bit,” he said. “But, like, he's all caught up. He's a tremendous player. We just had to communicate with him about some Counter-Strike fundamentals, and as soon as we did that, we kind of got on the same page. He's just a really good player, he caught on super quick, it wasn't difficult to integrate him [into the team] at all.”

That was just the beginning of the heaps of praise DaZeD gave Spyder. “He's pretty much one of the best teammates I've ever had. Just super dedicated, is down to listen and talk about things and is pretty upfront,” he said in response to a question about how it has been integrating Spyder into the team. “It's pretty easy to integrate someone who's just like a professional, right? If you're a professional, and you have the right mindset and the right work ethic and dedication, I think you're pretty easy to integrate into anything, quite honestly. And he's like the epitome of that.”

Given how highly the team's leader and staff thinks of Spyder, things look promising for T1. Much like the flashy teenagers on some of the other top teams, Spyder has lots of room for growth and development as he takes guidance from veterans in his first foray into a tactical FPS game. 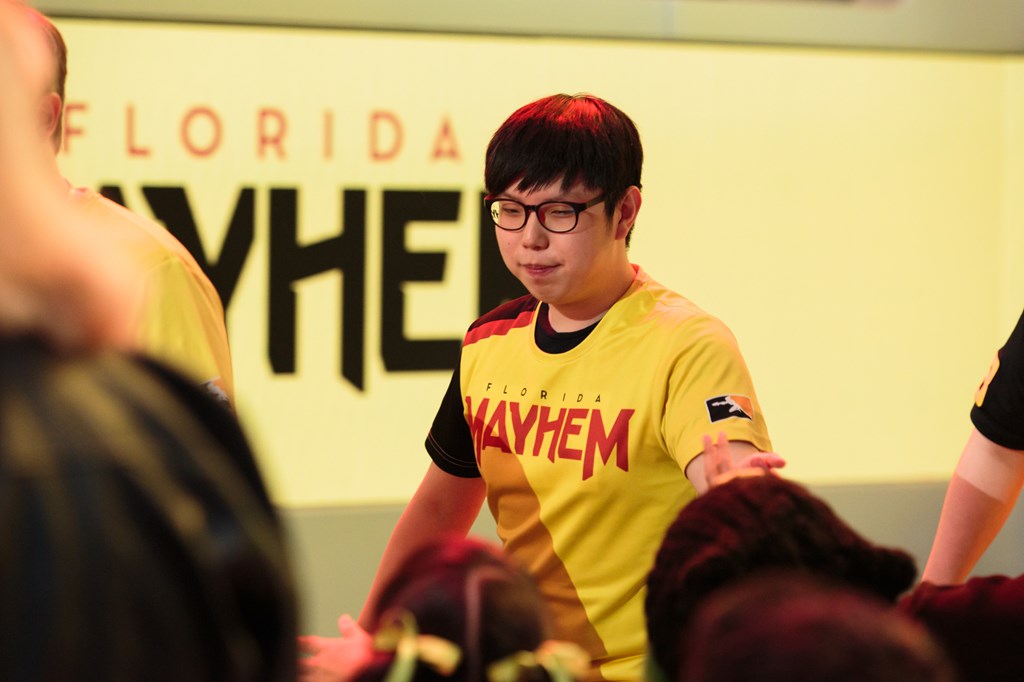 Spyder made his mark in Overwatch on some of the game's most aim-intensive heroes. Image credit: Robert Paul for Blizzard Entertainment

Spyder played in his first match for T1 just a few days after the team announced he was joining them. And while he was surely practicing with them long before that, he was still coming in relatively fresh with no real match experience in Valorant before. Even then, you could see flashes of his mechanical prowess when he flicked to a target's head across the screen to land a one-tap. But they were flashes and his performances were largely inconsistent.

But now T1 are taking a break from competition. Spyder has more time to grow accustomed to the fundamentals of tactical FPS games and gel with his teammates.

How much better he gets — or even if he gets better at all — we will only know with time. But if the praise from his teammate is any indication, it's more than likely he will already have grown remarkably by the time we next see him play.

And if that happens, Valorant fans from all backgrounds will start to understand the excitement of Overwatch fans when T1 revealed he was joining their team back in October.

whyd he change his name

sayaplayer is kinda cool, maybe not cool sounding enough. if i ever go pro i'm keeping my name.