Fearoth: "We all can't wait to play on LAN!"

Enzo Enzo Mestari, now a member of Ninjas in Pyjamas

The French Sova player was part of the highly successful HypHypHyp

Over the course of their two month run, the entirely French team accrued over $15,000 in winnings, took three Take the Throne crowns and defeated the best Europe had to offer in fish123, Prodigy, FABRIKEN and (the old) NiP.

Fearoth and fellow HypHypHyp members HyP and Crea would go on to join rhyme and luckerRRR to form the first official, finalized roster of NiP.

A few days before the Mandatory.gg Cup, VLR.gg spoke with Fearoth about his past as a CS:GO player, his feelings about Valorant, and his thoughts on the esport's future:

Was the release date of Valorant marked on your calendar when the game was first announced? Did the option to go full time on Valorant pop into your mind instantly, or was quitting CS:GO not conceivable at first?

At the time of Valorant's release, I was still in the final stages of my studies and was playing a few competitions at a good level on CS:GO with friends. When the game's beta came out, I got a key pretty quickly and started exploring the game.

After only a few days, I decided to create a French competitive lineup which had the ambition to seek victories in all European competitions. It was then that I met Lowkii and HyP, which quickly gave birth to the HypHypHyp group of CREA, LaAw, Fearoth, HyP and Petitskel.

NiP is your first organization of this magnitude, which allows you to be 100% focused on the game. How did you feel when the organization first approached you?

Following the performance of our team, many European and American structures observed and contacted us and NiP was one of them. Our goal was to sign as 5 to continue the French adventure, but over time and with the emergence of individual offers we had to make a decision. This ultimately led to the dissolution of HyPHyPHyP.

In terms of feelings, emotions were mixed. On the one hand I was sad to be separated from friends with whom I played for 3 months on a daily, and on the other hand I was happy to be able to join an organization as prestigious as Ninjas in Pyjamas and to have the opportunity to build a new competitive group with the guidance offered by NiP. 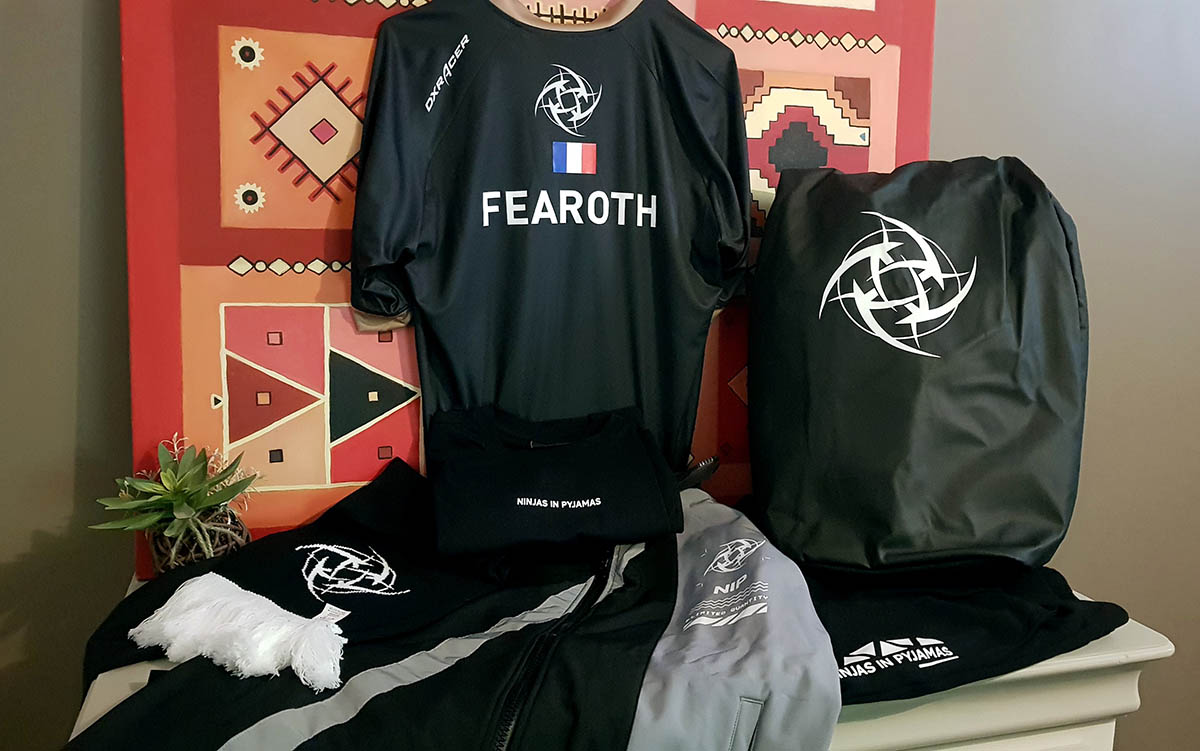 Even at home, Fearoth is decked out in NiP gear. Image credit: Enzo "Fearoth" Mestari via Twitter

We talk a lot about the resemblance between CS:GO and Valorant. Is playing like in CS:GO the best thing to do on the game?

Yes, having a competitive CS:GO experience right now is the best thing to have in the short term on Valorant. The two games are very similar mechanically and tactically. The shooting, the movements, the rotations, the economy — there are a lot of common points. However, even when coming from another game like Overwatch, Warface, Call of Duty, or even Apex for example, you bring a different vision and complementary principles that can raise the level of a team.

Is the way of leading your teammates different between the two games?

The way of leading is very similar: you can establish a game plan, principles, roles, and strategies. However in CS:GO, we face five players who have the same utilities: grenades, smokes, flashes and molotovs, while on Valorant we are faced against agents who all have 4 different abilities and ultimates. The amount of information to take into account and the possible combinations are increased tenfold compared to CS:GO. I think that unlike in CS:GO, the individual initiatives that one can take based on this information have a huge impact.

We have already started to see players complain about endless qualifications (seen during WePlay! qualifier), what's your opinion on this?

I think the Ignition Series have been a great opportunity for Riot Games to explore the different tournament and qualifying formats. For the qualifications, it is indeed not normal to see teams start early in the afternoon and continue to compete at 2 AM the next day. It is best to spread qualifying over several days to preserve the health of the players. For tournaments, I loved the GSL format offered by WePlay! and hope to play in this format again in the coming weeks.

What format do you want to see on Valorant for competitions, and what events do you expect to see happen at the end of 2020?

At the moment, Riot Games favors “one-shot” events. This is a good idea; it allows you to create events for the community while continuing to develop the game. I think 2020 will continue to be punctuated by this kind of event. In the future, we will surely see national and European leagues controlled by Riot Games, especially when the health situation calms down. We all can't wait to play on LAN!

You have been playing with HyP since the beginning and we have noticed that he is at ease in the game. How did it go for you to integrate a player who, unlike all the other members of HypHypHyp, is not from CS:GO? Do you try to lead differently for him or do you want him to get used to your way quickly?

HyP came to Valorant with an impressive ability to learn and absorb information. The integration was rather simple; I created a document to help him catch up with four years of experience in CS:GO and we saw together all the principles, the vocabulary, the rotations, the economy, etc. Everything he needed to feel serene in-game and out.

As for the lead or the instructions, there is no difference. And, on the contrary, acting differently with him would be discriminatory and would certainly impact his confidence. Now he's completely blended into the squad and his vision of the game is the same as any top CS:GO player.

Which teams / players do you watch closely in Europe, or more generally in the world, who inspire you or give you ideas?

I always keep an eye on G2, Fish123, and Prodigy, who are direct competitors. But, I am also inspired by all the teams you meet in training! The game is new, there are some great phases of play and some great ideas in everyone.

What have you mainly learned from your CS:GO experience, and what are the mistakes you may have made (in and out of the game) that you will be looking not to do again on Valorant?

All CS mechanics are applicable to Valorant, this is the most important part of my CS:GO experience. I don't think I made a mistake in Counter-Strike, but I've learned that the group should come first. It is essential for all players to get along well, to feel invested, and to be happy to spend seven hours a day with their mates. When we trust each other, we can do anything!

We see a lot of big American organizations signing teams; is money the only issue at the moment in Europe, or there is a deeper issue for why we have only seen NIP, ForZe and G2 Esports invest in the game so far?

Indeed, we see many American organization investing in the game, while very few organizations engage in Europe. I don't think money is a problem — you have to look a little bigger. I think that the culture and the ability to be entrepreneurial are a big brake in Europe. Entrepreneurial risk and investment are rooted in American culture, while in Europe we are already a little more cautious.

In France, for example, we have very good organizations like Vitality, LDLC, or GamersOrigin who could launch into Valorant, but because the legal framework is not conducive to risk-taking means, these organizations remain for the moment in an observation phase to ensure that investing in Valorant is 100% reliable.

What are the updates and additions that you expect to see on Valorant? Are you satisfied with the current game, or do you hope for a number of significant changes?

With a new agent every two months, I expect the game and its meta to evolve and it's super exciting to have to adapt and create new opportunities with new content. In terms of the game, I look forward to the possibility of having a coach like in CS:GO. For this, it would need a spectator mode where you can only see the point of view of your team. I also hope that observer mode improves over time. I think using CS:GO's HUD for viewers can make everything much more visible. A small example that illustrates my point: https://twitter.com/fearoth...

What are your dreams for your Valorant career?

Continue to have fun playing this game every day and win as many competitions as possible!

Thank you very much to VLR.gg for inviting me to answer these questions and thank you for your support!

Fearoth and NiP will have their next shot at a European title in the Allied Esports Odyssey, an Ignition Series tournament where they have been invited alongside G2, fish123 and Vodafone Giants.